SEE MY CAT IS SO AWESOME HE THINKS HE’S A PERSON!! From http://www.picturesofcats4you.com … No, seriously, it is.

Fandom is a tricky phenomenon.  Every single one of us is basically a huge nerd about something, and understandably we want to share our interests with those around us.  But fandom has a way of taking a legitimate love in our interests and twisting it into a horrible, conversation devouring monster, ready to pounce at a moment’s notice and begin making everyone feel awkward as all small talk dies.  The monster is ravenous.  It must feed.

I’m sure most people have come across this problem at some point in their lives:  You love something so very much that it almost hurts.  It could be a story, a movie, a book series, a sports team or your cats, your significant other, a comic strip, a TV series or your family.  You want to tell the world about it.  You want them to recognize that what you have found is special and amazingly wonderful, to have them see it the way that you do.  But…  the more you talk, the less interested they seem.  By the end of the conversation, you’re being ignored entirely.  You have no idea why.  Can’t they see how great everything is??  Maybe you had better go over the best part again.

“No, listen…  my cat tried to jump and fell off the table and he thinks he’s a person.  Don’t you see?!”

Fandom isn’t really a new phenomenon, mainly because humanity has been a race of nerds ever since society was cobbled together.  Fans obsessed over the pyramids, started the crusades to tell everyone that God is super great, painted the Sistine Chapel because bare ceilings need fan art, and learned how to fly because everyone should see how cool it is.  Fandom, or to put it more accurately, obsession, can lead to new work being created, and then the new piece will go on to inspire hundreds more.  It hasn’t always been a peaceful thing, mind you.  In the dark ages, religious fandom had a very aggressive and fire-friendly way of making new “fans,” which does explain why when you run across someone who is not a fan of your particular obsession, a small voice in the back of your head starts asking where the torches can be found.

The major problem with fandom is that sometimes we are our own greatest enemy.

At one point when I was growing up, I had a passing interest in anime.  Unfortunately, in those times, it was Dragon Ball Z, or bust, and the next closest show was Voltron.  The thing about Dragon Ball Z is…  well, it wasn’t exactly what I’d call a good show.  But hey, I was like 13 and it had explosions and power levels and kung fu.  You can’t ask for more than that out of a cartoon.

My love for this show lasted about as long as it took me to run into a “real” anime fan, who then proceeded to tell me, at length, why everything I like is terrible compared to the things he likes.  He went through, at length, the names of animators and voice actors, and special dubs and original dubs, and deleted episodes and unedited content.  That kind of thing is a bit off putting, because “no one wants to be that guy.”

Years later, I found myself on the opposite side of the spectrum.  I’ve become mildly addicted to webcomics, and my favorite is currently… Homestuck.

The comic is by and far one of my favorites on the internet right now.  Over the years, I’ve tried to share my love for this comic with my friends and loved ones, but no one has ever taken the bait.  I later learned this is because the fans for this comic are so numerous, the odds of you coming across horrible fan art of the main characters making out is much higher than the odds of you finding the comic by itself, unassisted.

One of the things I’ve heard more often than not is that the hyperactive fans of the comic have been the main, deciding force for many people to never check it out.  The fandom has essentially grown to the point where it has dwarfed the comic itself.  At the time I thought this was preposterously silly, but it made me think.  I do the exact same thing with another very major sci-fi franchise. 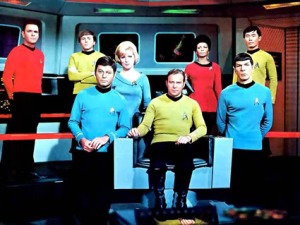 Image from Wikipedia. I don’t know much about Star Trek, but I do know the two crew members in red are probably going to get straight up murdered.

Star Trek.  When I think of Star Trek, I think of overweight guys in starfleet shirts arguing about whether Kirk or Picard was the better captain, quoting each show verbatim and spouting endless trivia about Vulcans.  This has nothing to do with the actual show, but the fandom for Star Trek is so large I have a hard time seeing anything else.  It’s kind of like Dungeons and Dragons…  instead of a fun, adaptable, complicated game, people think of nerdy high schoolers in their mother’s basement screaming “magic missile” at girls and getting beaten up in the lunchroom.  From personal experience, I can tell you that wasn’t the case.  I hardly got beaten up in the lunchroom at all.

How many others out there have written something off because of an overzealous fanbase?  It makes me sad, not because the fans are unable to successfully share what they love, but more so because these things have fans for a reason.  If we give them a chance, we may become fans, too.  There’s so much lost potential.

With this in mind, yesterday, I watched my first-ever episode of Star Trek.  It was the first one, the series pilot, back before Leonard Nimoy and William Shatner started really acting ridiculous. From now on, I’m making a point to ignore the trivia quoters and Klingon cosplayers and determine for myself if the show is something I can become rabidly obsessed over.  (I promise that if I get obsessed about Star Trek I won’t post about it here.  I don’t want to become “that guy,” you know.)

As for the rest of us, the fans, maybe take a moment to remember that not everyone is as excited as we are.  Take a step back, be calm when trying to recruit more into the fold.  The pyramids weren’t built in a day, after all.