Thank God we finally have color pictures of this!  Images in this post from nasa.gov

I’m sure I wasn’t the only one abundantly excited when the space probe MESSENGER came back with the first ever pictures of the planet Mercury taken from the planet’s orbit.  I’ve been a bit of an astronomy junkie for years now, with all the ups and downs that brings, and I’m always mystified when scientists send us back reports of incredibly bizarre things happening in other parts of our galaxy.  My favorite so far is the star known as BPM 37093, a former white dwarf star that caved in on itself a horribly long time ago to become the largest diamond ever discovered.  In an infinitely large universe, anything is possible, I suppose.

I first got into astronomy in high school when I took a basic level class that taught the locations of constellations and the myths they were named for, as well as light spectrums, other astral bodies like comet and meteors, and (unfortunately for me) distance. This information has largely seeped out of me over the years to the point where I can identify simple constellations and objects, but the distance…  the distance stuck with me.

This is an image of a galaxy, around 850 million light years away from earth, that is getting devoured by a super massive black hole.  This is, luckily for us, an abominably long way away.

It took me several years to really wrap my head around the numbers.  Light from our sun takes eight minutes to reach us, which is a neat frame of reference if you’re going to be mucking around in deep space distances.  The next closest star to us is Alpha Centauri, which is located about 4.37 light years away from our meager little star.  That’s about 41.5 trillion km, which also translates into miles somehow but I’m bad at math so you’re on your own there.

This means a ship traveling at the speed of light will take 4.37 years to reach Alpha Centauri.  I think we can make it to other planets in our solar system in about that time, but to my knowledge NASA never went ahead with the project.  Want to drive a guy insane?  Throw him into space in a high risk, probably one way trip to another planet, letting him know full well he’ll probably never come back again and if he somehow manages, it’ll take the better part of a decade.

And Alpha Centauri is the closest system to us.  Don’t even get me started on the distance to other galaxies, either, because that’s so huge they had to come up with another friggin’ word for it.  Some of these stars…  some of them have burnt out billions of years ago.  Billions.  But you’d never know it from Earth, because it’s taking the light that long to make its way here.

The Butterfly Nebula! Pretty, isn’t it? It’s also a fiery death storm you probably aren’t going to want to get caught in.

When the MESSENGER images of Mercury came back, however, it hammered home the fact that the universe is very, horribly, terrifyingly large, and the vast majority of it is dead, and lifeless. The planet is so hot and barren, color pictures of it turned out in black and white anyway.  Many, if not most, planets in our galaxy are like that:  toxic, hot or frozen wastelands unable to support life.

That’s not to say all of them are like that.  I have no doubt there is life on other planets.  There’s simply too much space out there for the impossibly low odds of life forming on a planet with similar conditions to ours to not happen again.  But, wherever this other civilization may be, there’s even less of a chance that they’ll develop to the point where they’ll be able to interact with us in any meaningful way.  The distances are too great.  It can be pretty depressing, when you think about it.  So much space, with so much potential. 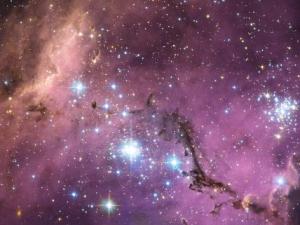 New stars are still being formed in the Large Magellanic Cloud, orbiting our galaxy just 200,000 light years away. Fun fact: If you go here, you will die.

But still, I guess I’ve taken some comfort in that fact, though.  For years, a clear night sky has been refreshing.  No matter how big your problems may be, they don’t even register at all in the larger scheme of things.

That might sound nihilistic, but I think it’s a great way to put things in perspective.  You think you have problems?  Somewhere out there, right now, you have entire stars being devoured by black holes, going nova and wiping out planets, meteors peppering planetary bodies so hard that if there was any life on the planet, it has long since been erased.  You have particles crashing into planets at just under the speed of light, and planetary atmospheres that are made of pure poison, with gravity so thick it could crush you into paste in an instant.  Everything in between is cold, hard vacuum in which no life can survive.

Next time you say “stop the planet, I want off,” try to think where, exactly, you’d rather be.

Worrying about only having $30 until payday, or if your new puppy is crapping on the rug, is pretty simple, by comparison.  Life can be pretty hard, but at least we, miraculously and against all probability, have the opportunity to live here, on this planet.  We have the luxury to get mad when our internet service goes out or someone posts something nasty about you on Facebook, to worry about work, to be sad and happy and angry and apathetic about the big and little things going on in our day-to-day lives.

Even at our worst, we still have it better than Mercury.