Giraffes are only one step removed from koalas. Who also like to hump trees.

I have heard that the best way to become a better writer is to be completely and brutally honest with your audience.  Is this a thing?  Or did I just make that up ten seconds ago?  Oh, how the lines blur.  I’m going to plug along with it anyway, because I am not one to back down from a terrible idea.  Here we go:  full disclosure.  I am going to tell you about one of my greatest fears for as long as I can, before I devolve into frightened high-pitched whine that will keep dogs awake long into the night.

No, not that fear.  Good lord, not that one.  No, the other one.  The one that I don’t think I’ve discussed with too many people, for fear that they are sympathizers.  You see, dear reader…  I am absolutely terrified of people wearing animal costumes.

Agggh no, now I am thinking about them.  Crap.  This is going to be tougher than I thought.  Let me make a slight tangent just so I can recover a bit, and then we’ll get back on track with this thing.

When I was a kid, I went through that phase where those dopey bastards in the furry suits were the greatest damn thing that ever escaped out of Walt Disney’s twisted imagination.  You can only watch so many movies about Mickey Mouse and Donald Duck running around and being magical…  or whatever it was they did?  before you start to wish that you could have sweet adventures too.  And at some point, someone draws your attention to Disney World.  Where those same heroes actually live because they are real.

And then before you know it you are in Disney World, and suddenly Goofy comes skipping down the street toward you and…  something is not right.  Why…  is his head so goddamn big?  Why isn’t he talking!?  Why can’t he close his mouth anymore!?!?  Does he have lockjaw??  Can cartoon dog men get lockjaw?!?  WHY IS HE STEALING THAT CHILD OMG.

I think this is why some kids cry when they meet their heroes, who are portrayed as gigantic-headed monster men.  And…  I just typed that sentence.  Wow.

Lets re-center here.  Years went by.  Learning that Mickey and Donald and Goofy weren’t real was actually a pretty major relief.  But then…  the furry movement happened and brought a whole slew of disturbing questions.  And I had to face certain truths:  namely, those same suited monstrosities were all missing at least one essential piece of clothing. 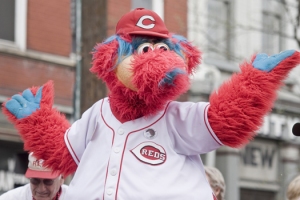 Seriously, what the hell is this thing, oh my god.

But who cares, right? Whatever!  It’s not like I’m watching sports, so I can completely ignore all those hideous mascots and unfortunate…  things that crawl up from between the cracks of fandom.  Yeah, that’s right!  I’m looking at YOU, Gapper!   You…  bear…  parrot… koala alien…  thing?  I have a hard enough time with Mr. Redlegs, for God sake, I don’t need this shit in my life.  Oh my god why did I look for a picture of him?  This blog post is a complete loss.

So anyway, not something that I have to deal with too often.  But then last week, I was sent off to cover a ribbon cutting for a new child care place out where I live, and…  IT happened.

I was just standing there, blandly smiling my way through some small talk when a door opened.  And out walked a fucking bipedal giraffe monster with a sunny disposition that alternatively set about hugging and terrifying the children present in the room.  And I began to notice that I was subconsciously cringing in terror and hiding behind other adults in the room.  It wasn’t something I was prepared to handle.

But then the pictures happened. 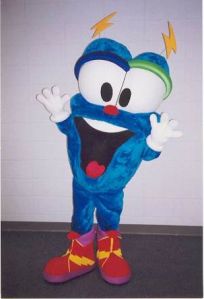 Just imagine waking up during a thunder storm late at night to find this thing standing over you, holding a bloody knife in one hand and a sack full of children in the other. That feeling in your gut? Right now? That’s terror.

And then…  the lady who set up the ribbon cutting ceremony demanded that pictures be taken while she was kissing the giraffe.

Agh, no.  No no no nooooo.  Lets change tracks here.  The basic point I was trying to make is that you do not, under any circumstances, kiss the giraffe furry man creature while at a public gathering, especially while children are present.  And by children of course I mean me.  My reaction to it, IE: to shout “oh holy shit why is this happening” positively made the kid who refused to leave his mother’s lap due to a fit of unbridled terror seem like the bravest kid who ever snuck into a midnight showing of Saw 4.

I also took the picture of the actual ribbon cutting, to many calls of “CAN YOU SEE THE GIRAFFE??”  To which I responded “yes the bastard is a seven-foot tribute to the unholy perversion of the laws of God and man.  Of course I can see the fucking giraffe.”

I think what gets me so uneasy around these dopey bastards is the level of deception involved.  They are men and women, who are pretending to be animals, who are in turn animal people, all while wearing cheery masks that hide their true features.  A lot of people are terrified of clowns, but you know what?  At least you know where you stand with a clown.  You can see its face.  There is therefore a 35 percent chance that particular clown is going to be a sociopath with a knife, just like any other conversation you can have with people.  Furry mascot men, not so much.  There could be anything in there.  I, for one, have a hard time trusting anything that goes to that much trouble to be the that creepy for absolutely no reason.

Okay.  There.  Blog post done.  I was originally planning on drawing some ridiculous picture for this, but…  I think I’ve already pushed myself too far on this.  I’m going to take plan B instead.  Namely: hit publish and then forget I ever wrote this thing.  Maybe nuke the blog from orbit, just to be sure.